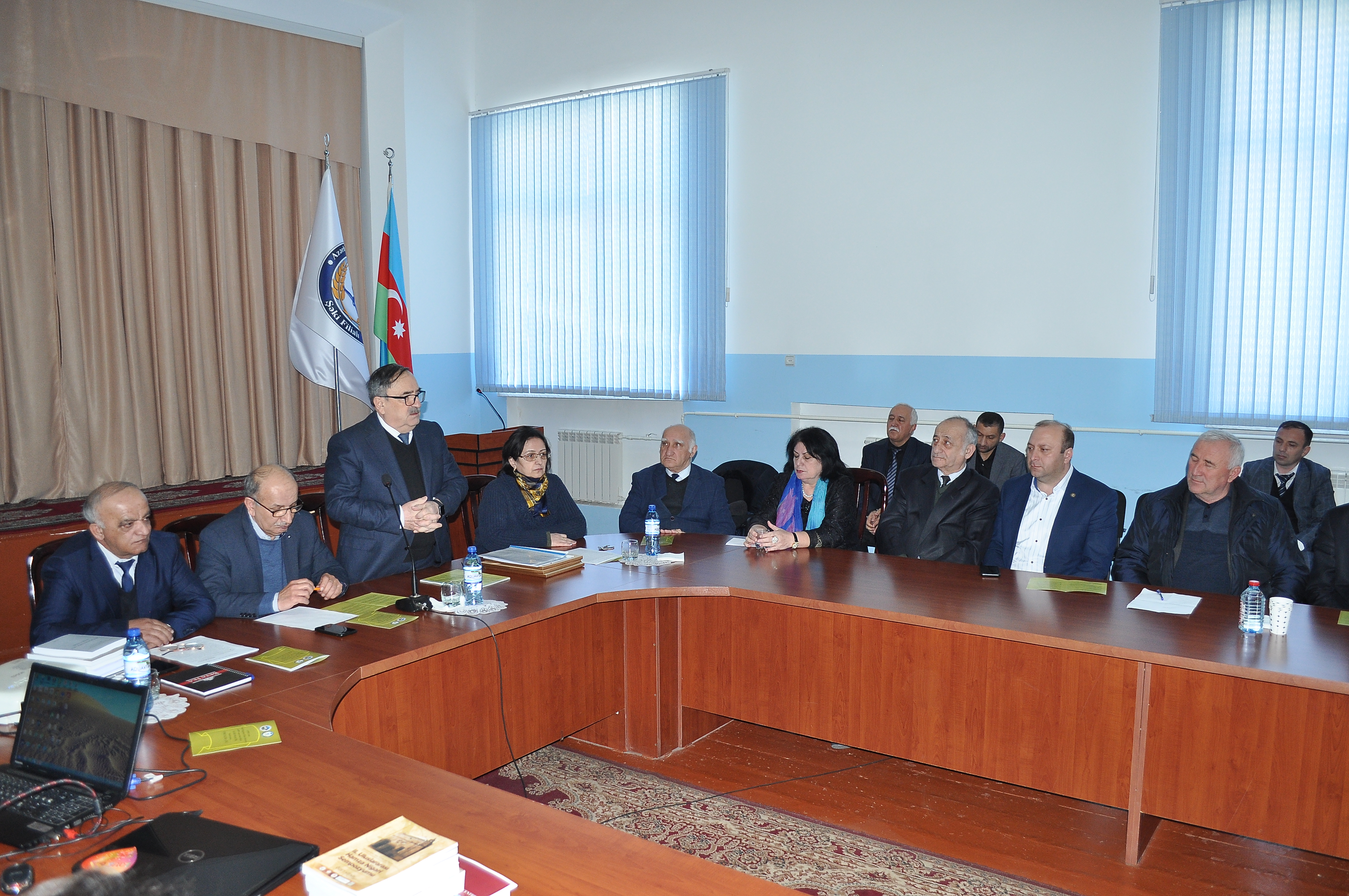 A scientific-practical conference dedicated to the "Science Day" was organized by Sheki Regional Scientific Center of ANAS together with Sheki branch of Azerbaijan State Pedagogical University on March 29, 2022
Mar 29, 2022 | 12:00

Opening the conference, the director of Sheki RSC PhD on physics, docent Yusif Shukurlu spoke about the order of the President of the Republic of Azerbaijan Mr. Ilham Aliyev dated April 9, 2018 on the celebration of March 27 as "SCIENCE DAY" and the essence of the decision of the Presidium of the Azerbaijan National Academy of Sciences dated March 11, 2022 No. 7/1. He. He described the establishment of Science Day as a manifestation of the exceptional care shown to science by the President Ilham Aliyev and his high value given to the scientist. Director of Sheki branch of Azerbaijan State Pedagogical University, Doctor of Mathematical Sciences Rafig Rasulov spoke about the celebration of Science Day in a number of countries and the contribution of Azerbaijani scientists to national and world science.

At the conference: "Miracles of the human brain and models of artificial intelligence" (N.Z. Chalabiyev, deputy director for scientific affairs of ASPU, Doctor of Philosophy on pedagogy, docent), "Scientific results of Sheki RSC employees and their role in integration into world science" (E.V.Abdurahmanov Scientific Secretary of Sheki RSC, dissertation of the Institute of Archeology and Ethnography of ANAS), “Abundance of information, its systematization and fuzzy thoughts about science” (G.A.Abdullayeva, deputy director on educational work of ASPU, PhD on philology, docent), “The role of Sheki RSC of ANAS in the development of Azerbaijan science” (U.B. Murshudova, dean of the faculty of philology of Sheki branch of ASPU, leading researcher of Sheki RSC of ANAS, Doctor of Philosophy on philology, docent), “Balakan scientists in the XVIII-XIX century”(A.A. Mammadli, leading researcher of “Historical Heritage and Ethnography ”department of Sheki RSC, PhD on history), “Global Climate Change and Its Ecological Disasters”(S.T. Feyzullayeva, head teacher of “Natural Sciences and its teaching technologies” department of ASPU), “The role of Zagatala scientists in the development of Azerbaijani socio-philosophical thought in the beginning of the XIX-XX centuries” (A.O. Sultanov, scientific researcher of “Historical heritage and ethnography” department of Sheki RSC, PhD on philosophy), “Youth policy of the Azerbaijani state and the role of young scientists in the development of science” (T.K. Adishirinov, the chairman of the Council of Young Scientists and Specialists of Sheki RSC). Then there was an exchange of views on the reports.

At the end of the event, a group of employees of Sheki RSC and Sheki branch of ADPU, distinguished in their scientific, scientific-pedagogical and scientific-organizational activities, were awarded honorary diplomas.